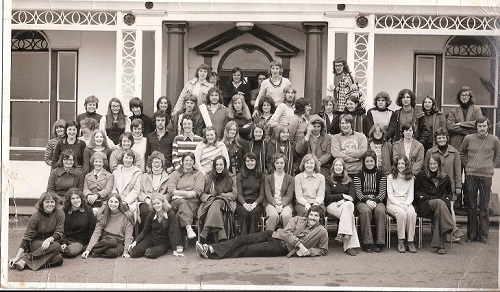 Over the weekend of Saturday 19 and Sunday 20 August 2017 a group of alumni, who started at Charlotte Mason college in 1974, returned to our Ambleside campus for their reunion.

The reunion event itself was held on the Saturday night off campus at the local cricket club with dancing, music and buffet food. Judging by the many stories regaled and the photographs on Facebook a good time was had by all.

Joanne Lusher, University Alumni Relations Officer, met with the group on Sunday morning for a campus tour.  The first stop was Millet where they discussed the charcoal murals on the walls of the building.  Fred Yates illustrated the walls of the small stone traditional building in around 1901 with charcoal reproductions of famous Francois Millet works of art. Yates was visiting Ambleside to paint a portrait of Charlotte Mason, which is now in the collection of the Armitt Museum. Yates took the opportunity to lecture the Charlotte Mason College students on Millet and drew the murals to illustrate his talk.  Miss Mason declared that that the murals were so good they had to be kept and preserved.

Many of the group had not seen or heard of the murals previously as they were covered up in the 1970s when the building was used as a student dormitory. The group were very surprised to see them here and make the connection to the name of the building.

Their next stop was Langdale and much discussion ensued about the Wordsworth steps which once stood where the building is now.  One member of the group pointed out that the steps got their name because William Wordsworth himself had paid for them. Wordsworth’s cousin, Dorothy Harrison, lived in Scale How around the early 1800s with her family before Charlotte Mason purchased the site for her House of Education.  The steps were a distinctive and memorable part of the campus for our alumni and they told tales of posing for class photographs here. 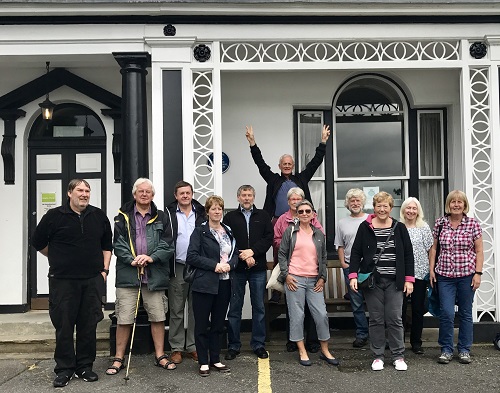 Inside Langdale the group were shown to a small heritage display, produced with kind permission from the Armitt Museum who lent some beautiful photographs of the college and the students in Charlotte Mason’s time.

The group then walked up to the top of the campus to visit the Charlotte Mason Building which opened in 20003. The building sits on the site of the former Education block. A visit to the Barn was next, which our visitors fondly remembered as a dance hall, theatre, and even a badminton court in their student days. Nowadays the Barn has been converted into a library, student study space, offices and a café.

The last stop on the tour was Scale How, the most iconic building on campus. The building is not currently in use, but the group enjoyed looking through the windows and reminiscing about times spent sneaking out and even stealing food from open kitchen windows!

We are always keen to hear from alumni from any of our campuses or legacy colleges regarding reunions or campus tours. No matter the size of your group or scale of event, we would love to help you reminisce about your student days.   Full information can be found here.  We also offer discounts on room bookings and on site accommodation for our alumni.