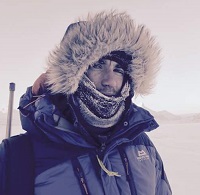 Polar bears, temperatures down to minus 40 and the ever present unpredictable nature of the Arctic winds have been part of Arran Laird’s life for the past year.

The class of 2016 outdoor leadership alumnus from Harrogate is enjoying a range of experiences while based at Svalbard, the Norwegian islands between the country’s mainland and the North Pole.

Arran’s log details just one of his many experiences:

“To start our ski trip we took a boat to the abandoned Soviet town of Pyramiden.

Quickly we were informed that there was a polar bear at the dock just an hour before we arrived, with the track going from the dock and around to South West of the mountain, on our planned track.

With the rifle and our equipment, we set of on our route. Heart going just that little faster, I continued to follow these tracks as it was the only route possible. The temperature was around -18C but as we came around to the north we battled the wind in our faces, where we had some white noses in the group, this and coming to the end of the day, we made camp at the west side of Petuniabukta. Quickly I organised the camp by probing the area to make sure we had enough snow for our “kitchen pits” and for safety reasons. Looking out across the landscape and the sea ice when on bear watch, the temperature dropped further.”

With Rhiannon Pritchard, another class of 2016 Ambleside graduate, the pair successfully applied for the Arctic Nature Guide, a  one-year training programme held in the frozen north.

For Rhinannon the trip hasn’t been without its challenges as Arran recorded in his log:

“As mentioned the previous night was cold and windy and not knowing, after Rhi’s bear watch she couldn’t get warm in her sleeping bag again and started shivering and then later stopped and continued the day as normal.  Over lunch Rhi got colder and her hands started to freeze. Additionally, due to eating her blood when to her stomach and cooled her further hence the ending result: a group member was trying to warm her hands up she passed out,,, at this point the weather was quite something. Not ideal. I went over to help as I saw lots of people trying to help in keeping her warm and trying to wake her. I got the group shelter, heat pads and thermos and talked to Rhi trying to keep her awake. She was passing in and out, my heart was pounding. Quickly we rapped her up in more down, hot bottles and heat-pads; she started to shiver. We were only 5 minutes from calling for a helicopter. Starting to regain continuous consciousness you could really see how deep the cold had got to her and the pain of thawing out. We didn’t move before we were sure she was warm enough to move and ski north out of the wind.

We got to the west of Gizehfjellet and the strong katabatic winds slowed dramatically. Considering the current weather conditions and the condition of Rhi this was the only area where we could camp. However, this area was stripped of snow and only left a thin layer of ice,,, not ideal but it was our best option. After talking to Rhi it was worked out that she became mild to moderate hypothermic over the night hence the feeling of not feeling cold. That developed sever hypothermia over the lunch time.  Later, exhausted, she was warm in her tent. An eventful day.”

Despite the challenges both have developed from the trip and are viewing their return to the UK with some regret and both say they intend to make full use of the experience to go on to a future career working in the outdoors.