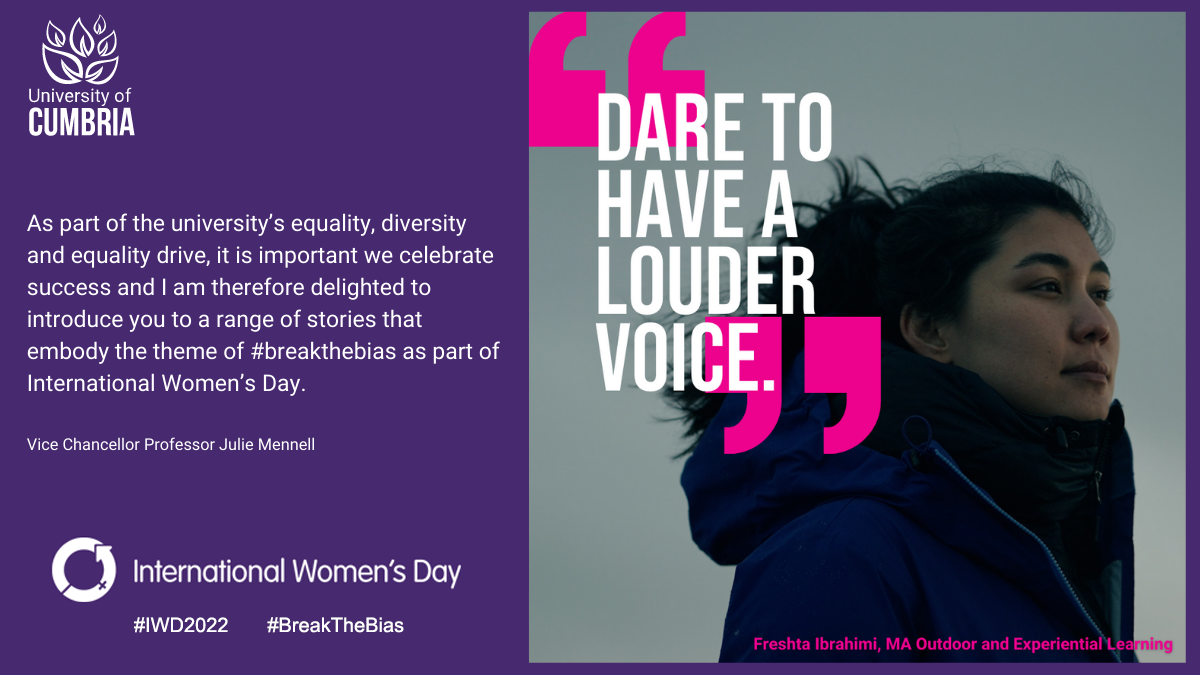 Vice Chancellor Professor Julie Mennell states: “I am delighted to share a range of inspirational stories in recognition of International Women’s Day #breakthebias”

Tuesday 8 March 2022 is International Women's Day, visit https://www.internationalwomensday.com/ to find out more and get involved in the campaign.

Freshta was project coordinator of a women’s led mountain group Ascend Afghanistan, she has written and presented on how the group has enabled women to access sport, learn to climb (and as a woman to summit the highest peak in Afghanistan). Her story has been shared in the Guardian and the British Mountaineering Council website and she has presented at the Royal Geographical Society.

Freshta said “Dare to have a louder voice. For me International Women’s Day has always been a positive and supportive movement. A day that reminds me of my own capabilities as I begin a new chapter of my life, to nurture my talents, to seek and embrace role models for myself and to strive to become a role model for others.

This is not simply a date for the free and educated generations of women around the world to celebrate, it is about remembering all the women of past generations who suffered and all those who still do.

I want to use this opportunity to celebrate all the women of the world and especially the women of Afghanistan at this tragic time, when their voices are not heard, they are still being kidnapped and killed for fighting simply to gain their basic right to freedom, equality and education.

I hope that one day not a single woman in any society will be oppressed as a result of religious, political, social or cultural misogyny.'' 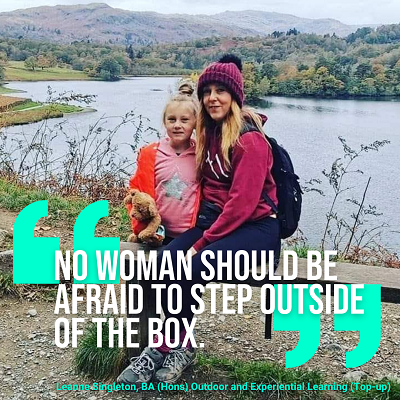 Leanne never wanted to follow the career path mapped out for her when it was assumed that, living on the west coast of Cumbria, she would end up working at Sellafield along with her peers. The experience of raising her daughter on her own gave her the drive to be the best she can, and it was while studying for a Higher National Diploma in sport and exercise last year she discovered her love of the outdoors.

Leanne is now studying at the University of Cumbria Ambleside campus, and her dissertation is on the barriers to participation in outdoor activity for people in Copeland.  She has recently presented at the Institute for Outdoor Learning Conference North West.

Leanne said: “No woman should be afraid to step outside of the box. If I could sum up what International Women's Day means to me, it is that no matter what you want to do or who you want to be, through hard work and the empowerment of other women you can achieve so much.... After all our dreams aren't biased.” 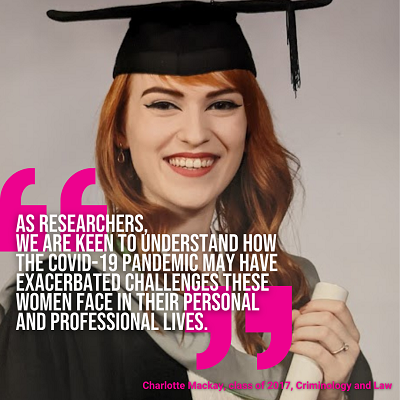 Nominated by Carolyne James, Senior Lecturer in Criminology and Policing

Charlotte graduated from the University of Cumbria in 2017 with a 1st class degree in criminology and law. She worked as a special constable during her studies and was co-president of the University Law Society and served as class rep throughout her degree. In recognition of her work as a rep she was presented with a "smart thinker" award. In her final year she wrote an essay about the effectiveness of forced marriage legislation, which went on to be shortlisted at the Global Undergraduate Awards and she was awarded the Sweet and Maxwell Law prize for achievement. After graduation she went to work as a local newspaper reporter and gained an NCTJ Diploma in journalism. Two thirds of the newsroom staff were female, including the editor and deputy editor.

Charlotte said: “In 2020 I decided to return to university and completed a Master of Research (MRes) degree in criminology at the University of Glasgow. I became increasingly interested in feminist intersectional research and became aware that the positionality of the researcher has a significant impact on their findings. My final research project, under the guidance of Dr Nughmana Mirza, identified gendered discourses of war and conflict in British media depictions of Gypsy/Travellers, where stereotypes of 'masculine threat' and 'female vulnerability' are manipulated to portray Gypsy/Travellers 'as/at risk'. I hope to build on this research through future PhD study.

I am now working as a research assistant on the Nuffield-funded research project Women Working to Support Women in the Welfare Sphere: Psychosocial Challenges, which brings together researchers from the University of Glasgow, University of Cambridge and University of Massachusetts Dartmouth. The project uses an intersectional feminist approach to explore the wellbeing of women workers in organisations that provide services or advice to socially disadvantaged or marginalised women and girls. As researchers we are keen to understand how the Covid-19 pandemic may have exacerbated challenges these women face in their personal and professional lives.” 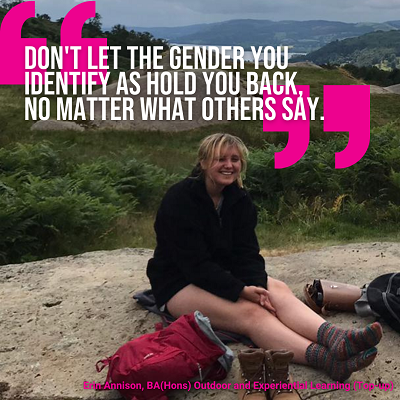 Erin is currently working on a dissertation titled "Menstruation and accessibility to outdoor and adventurous activities".  This is a subject that has little or no research, despite affecting around 50% of the population. It is really important research that their supervisors hope will lead to publication.

Erin said “To me, International Women's Day isn't only to celebrate women's achievements, but also non-binary, transgender and intersex voices. I've always been drawn to interests that have me placed in predominantly male heavy sectors, the outdoors being one of them. International Women's Day is a reminder to not let the gender you identify as hold you back, no matter what others say.” 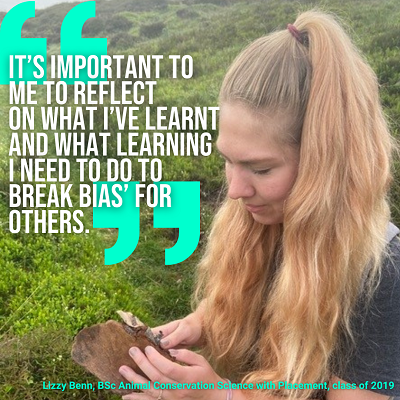 Lizzy did a great placement on bear conservation in British Columbia with the Applied Conservation Science Lab (who work closely with the local first nations to identify research needs and promote community-led conservation). This led to a strong dissertation on the use of facial recognition to census bears using camera trap images and she graduated with a first class degree.  Since graduating, Lizzy has worked as STEM ambassador for University of Cumbria to promote engagement, especially of women, in science and technology subjects. She then moved on to work for North Pennines Area of Outstanding Natural Beauty Partnership to promote community-led conservation and outreach.

Lizzy said: “At each stage of my career so far, I have had some incredible female role models, some of whom will not have even been aware of the positive influence they have had on me. It's been incredibly instrumental to have had these women breaking the bias before me and to not feel the pressure to prove myself in that sense. However, I’m hyper aware of the bias that exists for many and it’s important to me on International Women’s Day to reflect on what I’ve learnt and what learning I need to do to break bias for others. It might not seem like bear conservation on another continent and community engagement in the North Pennines have a lot in common, but barriers and lack of connection can exist for us all and I enjoy trying to thread together the pieces to help people connect with nature and heritage.