Support the refurbishment of the Harold Bridges Library 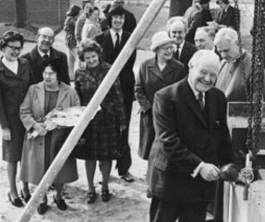 Working with the Trustees of the Harold and Alice Bridges Charity, we are exploring options to modernise the entire ground floor of the Harold Bridges Library this summer, but we need your help!

On 14th March, 1974, Harold Bridges laid the foundation stone for a new library at Lancaster’s St Martins College – only ten years after its founding – and had become one of the institutions principal philanthropists; enabling the new college to flourish and rapidly develop its reputation and standing.

From humble beginnings, Harold was born in Fylde in 1900, left school at 13 and spent several years as a farmhand before serving in the First World War and working as a brickie’s labourer. Putting himself forward to be an Army driver, Harold was not selected due to a speech impediment, but was advised of new opportunities for self-employment in the emerging trade of parcel carriage by road.

This encounter led Harold onto a path that would eventually see him running a successful haulage business, owning several hundred vehicles and multiple operations, and becoming an OBE and Knight of St John. A one ton Model T Ford lorry was Harold’s first vehicle and all manner of goods were transported between Lytham to Preston and Blackburn, including: cheese, ice, student luggage, and propellers for Lytham shipyard, and soon, a fleet of vehicles was required.

Despite rapid growth of ‘Harold Bridges Ltd’, Harold’s strong values remained in evidence throughout the life of the business and his staff were well looked after, with profit-sharing schemes and non-contributory pensions, and this approach was also reflected in his support for local causes. The Harold and Alice Bridges Charity was established in 1963 with an initial endowment of £100,000.

In 1974, Harold provided £16,000 towards the College’s first new building – a dedicated library – donating what would equate to around £150,000 today. The ‘Harold Bridges Library’ was opened in 1976 by actress Dame Flora Robson, and the college at that time had 700 students under the direction of Dr Hugh Pollard. By the 1990’s, St Martins had over 4,000 students, campuses in Carlisle, Ambleside and London; and courses across healthcare, education, sports, and the humanities. This demanded further expansion and a library extension was also generously supported by Harold though he did not, sadly, live to see this completed. 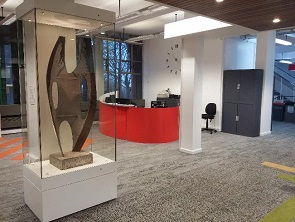 This philanthropic legacy endures today through the Harold and Alice Bridges Charity, and the University is working again with this organisation to explore further improvement and enhancement to the library that bears his name. Recently, the University invested in the library foyer and ‘Zone 1’ to substantially modernise this space, providing increased technology, power points, contemporary furniture, and prominent display of the renowned Barbara Hepworth piece – ‘Winged Figure’. 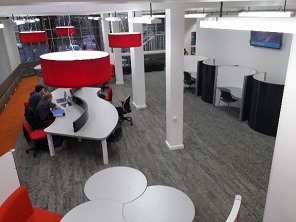 In conversation with the present-day Trustees of the Charity, the University is planning a programme of refurbishment through to ‘Zone 2’; modernising the entire ground floor of both the original, and extended Harold Bridges Library to meet the needs and expectations of today’s students. However, and in addition to potential investment from the Charity and University, we want to give the alumni community of St Martins the opportunity to make a gift towards the refurbishment programme – and we expect we will need to raise a further £15,000.

We are therefore looking for alumni that can enable this exciting project to happen, and if sufficient donations are secured, we may establish a ‘donor wall’ to signify the St Martins culture of community support, and student involvement in College life. 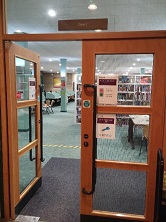 To find out more or to donate click here or contact Jamie Hodge, Fundraising Officer on 01228 888859 or james.hodge@cumbria.ac.uk

With thanks to ‘www.madeinpreston.co.uk’ for background on the life of Harold Bridges.