WHERE THE IMPOSSIBLE
IS MADE POSSIBLE

We equip, empower and inspire you to discover great things from the day you arrive

FIND YOUR COURSE   EXPLORE OUR CAMPUSES


SPEAK TO A STUDENT

Find out more about what it's like to study with us from those who are already here.

In the 'Quality Education' category in The Times Higher Education Impact Ranking 2020.

Contact our course enquiries team and we'll be in touch with an answer to your question.

We are Cumbria’s University – enriching people and place. A place of and for our community. A place of possibility. A place where amazing journeys happen. With guidance and support. Where it’s safe to be brave, to be boldly you. Where you’re seen and understood. Where knowledge changes lives, communities and business. Where stand out graduates go on to untold possibilities, making a positive difference to our world.

Affordable living starts here. We have some of the most inexpensive student accommodation in the whole of the northwest*, with rooms starting at just £10 a night. We have a team dedicated to assisting with whatever works best for you. Whether you want halls of residence – guaranteed for first-choice applicants – or independent housing in Lancaster, Carlisle and Ambleside we are here to help make it happen.

Check out our fantastic facilities that provide you with your unique space, such as our dedicated Business School, three research centres, human performance laboratory, sports centre and our new multi-million-pound teaching and learning hub.

Our campuses are in some of the country’s top locations, including two World Heritage Sites. In fact, we’re the UK’s only university to be set in a national park. Alongside Carlisle and the internationally renowned Lake District, historic Lancaster and buzzing London all bring unique and fantastic opportunities for you to get involved, feel and live the place and be part of a really great atmosphere.

We have a wide range of scholarships, bursaries, grants and funds available to support you throughout your studies with us. This includes the Cumbria Bursary - a non-repayable bursary designed to support first year students with a household income of less than £25,000. 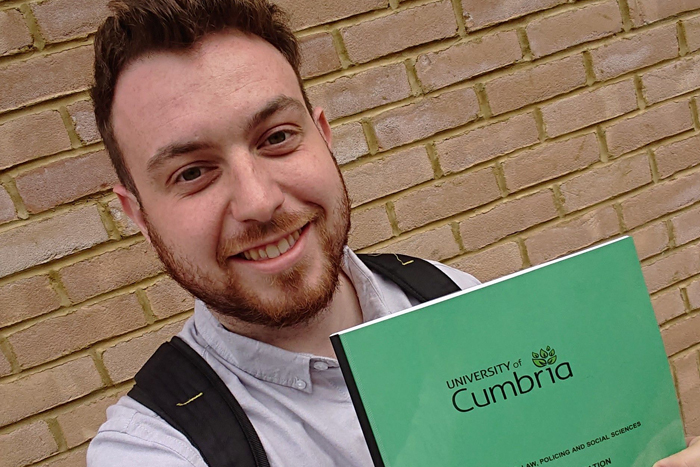 When you’re full of drive, determination and possibility, you can change lives, community and even the world. See what our students and lecturers are up to and get in the know on upcoming events.

A new Learning Quarter in Barrow that includes the building of a new university campus at its heart is among the shortlisted proposed projects that could help transform the town for future generations. The creation and management of ‘University Campus Barrow’ will be led by University of Cumbria and will be a centrepiece to the new Barrow Learning Quarter - one of seven schemes to be further developed to form part of a bid for £25 million of government funding.

The University of Cumbria’s quality education has been ranked in the top ten of universities worldwide, according to the Times Higher Education (THE) Impact Rankings, the only global performance tables that assess universities’ impact against the United Nations’ Sustainable Development Goals (SDGs). Many of the university's international partners have stepped forward to congratulate the institution on its achievements against the SDGs, which are also known as the 17 Global Goals.

Local residents, businesses, students and visitors are being given the opportunity to have their say on ambitious new proposals for a new campus for the University of Cumbria at the historic Citadels in Carlisle. Online public consultation takes place between Thursday 14 May and Thursday 4 June 2020.

Matthew Price and Ismat Khan both students at the University of Cumbria, applied for a place on the Council of Deans of Health UK Student Leadership Programme and were accepted before the COVID-19 pandemic and subsequent lock down.

Celebrated Lakes filmmaker to share his secrets of success

Terry Abraham, a self-taught filmmaker celebrated for his glorious ‘Life of a Mountain’ TV trilogy is joining the ranks of academia as a professor of practice at the University of Cumbria.

Young businesswoman Charlotte Treloar admits she has a tough choice to make after returning to the NHS to help in the fight against coronavirus. Charlotte is working with Covid-19 patients at Carlisle’s Cumberland Infirmary. Rules and restrictions imposed to tackle the spread of the virus has meant she's had to put her beauty business on hold. Yet the University of Cumbria nursing graduate says she has never been more proud to be a nurse and working for the NHS as she is now.

Technology and motorbikes for virus protection in race to save monkeys

In the race to save one of Africa’s rarest primates, University of Cumbria has turned to technology - and motorbikes - as Gambian ranger teams defend themselves against Covid-19. With numbers down to as few as 2,500 globally, critically endangered Temminck’s Red Colobus (TRC) monkeys have become the focus of an ambitious three-year project, spearheaded by university researcher and vet, Dr Mic Mayhew.

Cumbria's only prison has become host to a special tree nursery where inmates approaching the end of their sentences are helping an ambitious project to restore endangered fauna and flora. HMP Haverigg is playing a key role in the University of Cumbria-led Back on our Map (BOOM) mission to encourage communities to get involved in a far-reaching four-year reintroduction programme for 10 threatened species.

The Covid-19 crisis has thrown a spotlight on the work of essential key public services staff – particularly those in medicine, nursing, teaching, allied health professions, social work and policing. Such professions will be increasingly vital as the region begins to heal in the months ahead, and as the anchor institution for Cumbria, University of Cumbria plays a crucial role in training and supporting the key workers of tomorrow.

POSTPONED - A celebration of our BA degree students' work across all art forms. In 2019, the Gallery and its Degree Show were also Finalists for Art or Cultural Initiative of the Year at the Carlisle Living Awards.

Humans are having an enormous impact on the Earth’s natural systems and the loss of biodiversity will be as catastrophic as climate change.

We would like to invite you to attend a series of ‘Lightning Talks’ to be held via Skype on Wednesdays between 13.00-14.00.

Pathogens can have a huge impact from a cellular to an ecosystem level.

Behind the scenes of the BBC Four series ‘Life of a Mountain’ with filmmaker Terry Abraham.

We would like to invite you to attend a series of ‘Lightning Talks’ to be held via Skype on Wednesdays between 13.00-14.00.

The University of Cumbria is all about developing people. We offer short courses in a range of subjects and delivery methods.

Degree and Higher Level Apprenticeships are the best combination of on-the-job training and studying for a higher level qualification.

Whether you are a large national employer or a local SME we can support with recruiting students and graduates to your organisation.

Five campuses, one Cumbria, infinite possibility. Cumbria equips, empowers and inspires you to discover great things from the day you arrive.