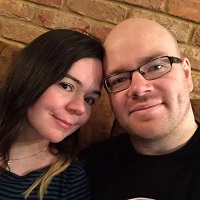 Recent graduates, Ryan Hutchinson (first class honours: digital arts in game level design) and Anna Lynch (pass with distinction: MA creative practice) have taken their interest and passion for video game design and used it to co-found Black Rat Studio, an indie game development studio based in Carlisle. Working on their debut title, ‘What’s in the Attic?’, a horror/thriller game which sees protagonist Mason/Fiona Wells investigating the strange disappearance of a local farmer and unravelling circumstances much more nefarious than first believed.

Ryan and Anna, originally from Sunderland in the North-East, moved to Cumbria in 2010. They have a son together named Leo, who they say is also an avid gamer and very young game modder.  With both having a shared love of games, they both ultimately ended up pursuing the digital arts course at Brampton Road, with Anna starting the course in 2014 and graduating from the course in 2017 and Ryan following one year after, starting in 2015 and graduating in 2018. It was at the end of the digital arts course that Anna made the decision to pursue the MA in creative practice, also based at Brampton Road.  She felt the course could hone her digital skills further, working on both augmented and virtual reality projects.  At the same time Ryan chose to take on freelance 3D and app-related work.

Other than their shared love of games and game design, they also have other varying interests. Ryan is a big movie buff and is particularly fond of comic-book based TV shows such as Arrow and anything DC or Marvel related! Anna on the other hand has a shameful love of terrible zombie movies with her favourite being ‘Return of the Living Dead’.
Anna says ‘I can feel Ryan cringe every time he sees me watching a zombie movie. Often, I’ll have something on as background noise while I research or 3D model game assets. I think he thinks I’m taking ideas from these movies and I’ll end up passing him a game document full of cheesy narrative and monster concepts with peeling face paint and porridge for skin, and I’ll be honest, I’ve definitely thought about it!’ Ryan adds ‘...That’s exactly what I’m afraid of.’

Both Ryan and Anna also share a love of painting albeit in different forms. Anna is an avid oil painter, something which she took into consideration in her interdisciplinary projects for her MA in creative practice where she chose to create an augmented reality app to add 3D elements via a handheld tablet device to her original paintings. Ryan, on the other hand, prefers to take his own painting skills to Warhammer models, loving nothing more than to apply detail and extra elements, adding to self-initiated storylines surrounding the Warhammer franchise. He has used this love of Warhammer to design a game concept which Black Rat Studio plan to pitch to Games Workshop following the release of their current project, ‘What’s in the Attic?’

Ryan and Anna have used the skills learned from the digital arts course at University of Cumbria to launch their continued pursuit of industry-relevant skills. With knowledge of 3D modelling, sculpting, narrative and game level design taken from their time as students at the Brampton Road campus, the digital artists have paved the way for development of their business, which also provides consultancy for app and digital media production.

‘I think, perhaps one of the experiences that you can only get from studying a course at a university such as UoC, is the camaraderie that you end up developing with your peers. Sure, you can develop that in a working environment, but there is something unique about the friendships you make while in a class of like-minded people,’ Anna comments. ‘You grow as a person, there have been so many days where our faces hurt from laughing so much (sometimes when we shouldn’t have been!). That is not to say it’s always smooth sailing, as people do develop their differences and people sometimes grow apart, but that in itself is a massive learning curve. It’s life skills, applicable everywhere!’, she continues.

Ryan explains, ‘we feel that on a personal level, the course made us want to continue learning and seeking more information relative to the game design industry. There is only so much any course at any university can teach students. At some point you must come to the realisation that if this is truly something you wish to pursue, then it’s up to you to take it upon yourself to learn all those extra nifty tricks and industry-wide software and pipelines. It’s not enough to leave university with validation from your lecturers or peers, because the proof of your skill lies within the industry itself, which evidently means doing the very thing you chose to practice and doing it to the standard expected of industry practitioners. That’s why continued practice and portfolio enhancement is necessary even years after graduation. We at Black Rat Studio would review an individual’s proof of skill, which may mean a task given to potential talent and a timeline, so we could see where their level of skill is relevant to what we expect for our projects and timescales.’

Both Ryan and Anna have noted that understanding one another’s strengths and weaknesses relative to digital content creation has helped to provide a brilliant workflow and has made delegation of tasks more efficient. Ryan has used his time as a student on the digital arts course to establish his strength for PBR texturing using industry software Substance Painter and visual programming within Unreal Engine 4.  Anna has used her time as a student on both the digital arts course and the MA in creative practice to further strengthen her skills in narrative and 3D game environment production. Working together, Black Rat Studio’s skill set is expansive and has scope to see the studio’s future as an emerging name in the game industry.

With help from the student enterprise team at the University of Cumbria, Black Rat Studio has made its way from a potential idea to an established business with visible social media handles and a website.

Ryan and Anna commented ‘we would like to thank the wonderful student enterprise team at UoC for their continued guidance and advice. We would advise any students, current or graduate to seek out any help that the university has to offer, as they can provide a wealth of information and support to those opting to pave their own way by creating their own business. Everyone starts somewhere, and for us at Black Rat Studio, it was speaking to the student enterprise team.’