Faces from the past 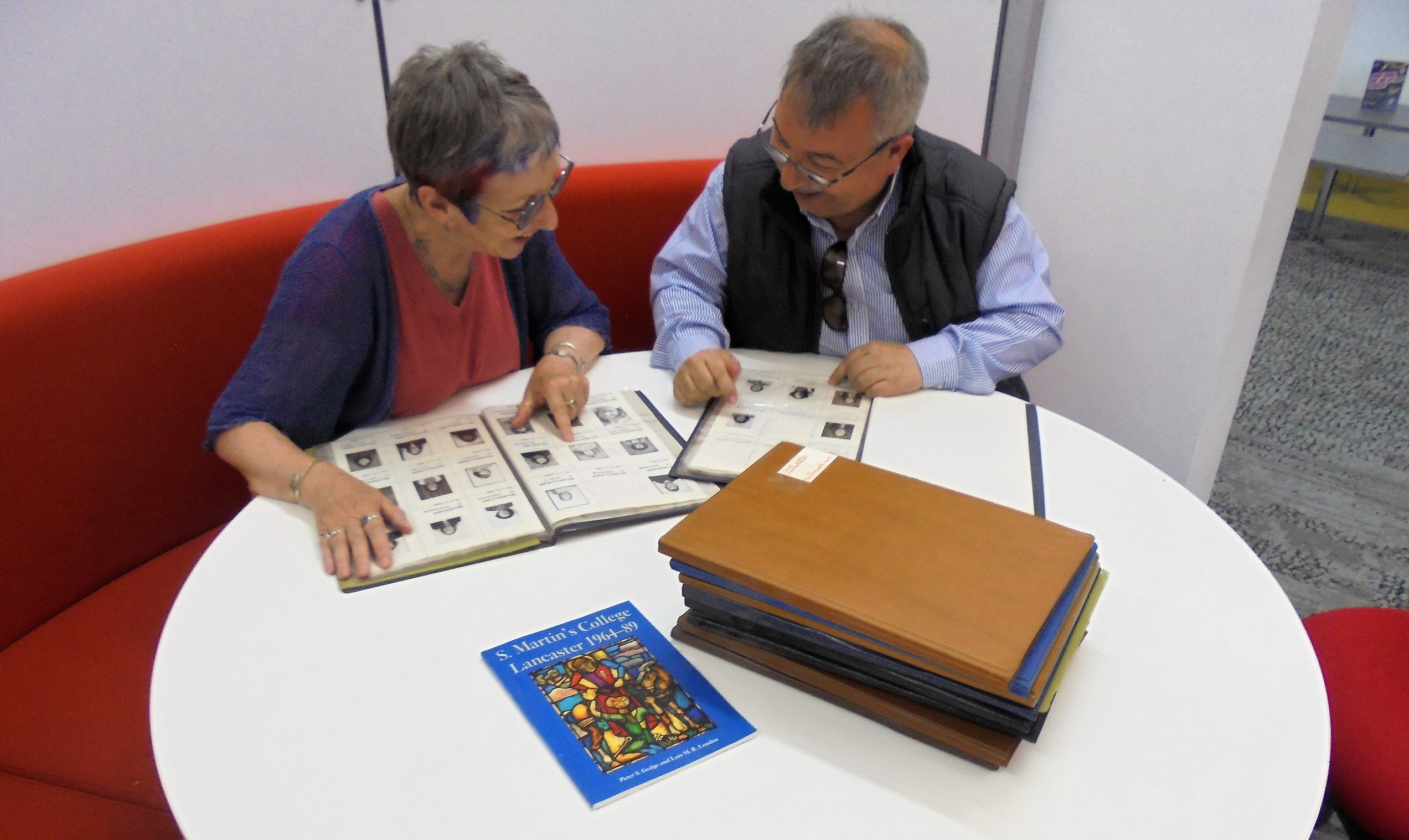 From the moment I first heard that S. Martin’s College (the name by which I knew it) kept a full set of ‘facebooks’ containing photos of every student in every year, I knew I must go and see them.

Three failed attempts, almost three years and one pandemic later, I at last managed to arrange to visit in August this year, thanks to the patient help of Joanne Lusher, the Alumni Relations Officer.

By this time I had gathered two others who wanted to join me – Tony Lewis (1974) and Alan Revill (1968), all of us also wanting to get our last look at the Willy Thom, in which we had each lived. We turned up in some trepidation – a mixture of excitement, and dread of the changes we were bound to find in the campus.

First stop was the library, which although recognisable to Tony and myself, had changed greatly inside. Our thanks go to the efficient library staff, who had our relevant yearbooks ready. We spread them on the table and began.

It is difficult to describe the feeling of seeing not one or two, but EVERY face that you knew from your year, all smiling tentatively out, so young, so exactly as remembered, dressed as we used to dress at the age of 18. All three of us began behaving in the same way – gasps, muttered names, fingers pointing, tuts and exclamations, all to no-one in particular. Inevitably, we felt a poignant nostalgia, and a wistful longing to know what had happened to all these familiar people whose laughs, clothes, walks and ways we instantly recalled. We were also assailed by cringe moments – how immature we had been; things we had done, felt and said….

Mounting the chapel steps, we heard serene piano music, and quietly entered to find a young woman practising. We walked separately around the space, the chairs set aside, the familiar figures of the controversial John Bratby painting half covered with screens. We were silenced by the combination of the past and the music.

Although the three newer women’s halls were sealed off for demolition, our dear JCR and dining room gone, and Barbon and Hornby inaccessible, we were able to gain access to our beloved Willy Thom, due to be pulled down shortly. The lift being closed up, we gamely mounted the stairs and made it to the top floor, where Alan and I, at different times, had had rooms opposite each other. Sadly all floors seemed padlocked shut, but then we found floor 7 open. Entering the corridor we explored the flyblown, silent kitchen and empty rooms, their original notice boards peppered with drawing pin holes of decades past, the view from the windows the same we had known as we sat at our desks. It was surreal, like entering a disused film set. There were so many memories to deal with, so many stories in each room. We stopped talking and opened wardrobes and drawers, stared into sinks and shelving.

Recovering over coffee in Lancaster, we realised we had made a mistake in asking only for our own yearbooks. We now wanted to see the faces of all those we remembered from the years above and below us. Alas – there wasn’t time – we will simply HAVE to come back!

Jane Bower, class of 1977 Secondary Art and Design and English

To contribute your own blog post to Aluminate, email alumni@cumbria.ac.uk