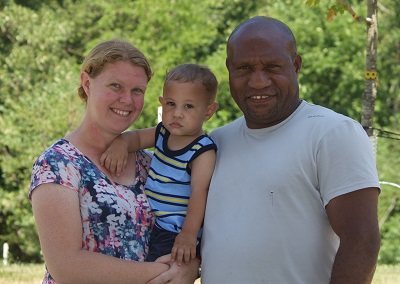 It started even while in college. Simon Potinu would send part of his school allowance money home to buy blankets for elderly people living in the rural, mountainous village in Papua New Guinea where he had grown up. Caring for the aging is something Simon feels should be done, in practical ways, while the elderly are still around to feel its effects. The blanket project has grown from those college days to now supplying over 70 blankets to those in critical need.

Simon has always had a heart for the vulnerable—a ministry that, since graduation, has extended to include working with widows, fatherless children and orphans. The goal is to lift up and empower those facing difficult circumstances, helping them find hope, support and practical assistance to get them through an often challenging existence.

Before studying and completing his Bachelor’s of Theology at Belfast Bible College (through the University of Cumbria), Simon did mission work in Mozambique, Bangladesh and India. After graduation, God began to turn Simon’s heart and passion back towards working among the people of his own country. Just four months after their wedding, Simon and, his wife Ruth, landed in Papua New Guinea and have spent the last two and a half years finding ways to serve those who are often forgotten. Their son-Trevor joined them 19 months ago and he is very much part of the ministry.

One project that has taken off under their leadership is a widow’s fellowship, which meets in the capital city of Port Moresby. Here ladies (along with their children and even grandchildren) meet monthly to share a meal, encourage each other and learn skills such as baking, budgeting and how to cope with grief. The baking classes, particularly, have been well received. In the near future, the Potinus hope to provide mini ovens for the widows who have the greatest needs so that they can start a small baking business out of their home earning a bit of an income to keep them and their families going. Eventually, the couple dream of opening a coffee shop in the city where the ladies can come for encouragement and also as a place where their baked goods can be sold to a larger market.

But, the Potinus’ work is not limited to the city. In the village where Simon grew up, he has helped organize building a house for two widows Yasameng (the mother) and Ai (the daughter-in-law). Yasameng’s son was in the process of building a house for all of them when he passes away leaving behind a young wife and two small children. The building materials remained untouched after his death as the mother and daughter-in-law had no means to continue. Now, as awareness of the situation has been raised, the building project has started once again and is now 70 percent complete. 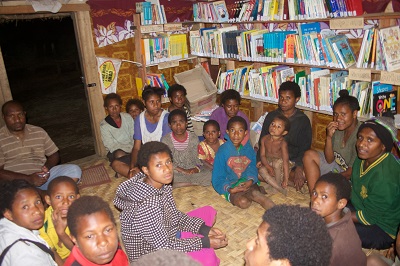 This house is not the only project that Simon has spearheaded. Growing up in this rural village Simon keenly remembers not having access to a single book while in primary school. Because of this, he and his wife have started a children’s library in the community. In the last two years, the library has grown from just 36 books to now over 700 books. The library is currently housed in a grass hut with hopes to build and move the books to a more permanent building soon.

It is a personal desire for Simon to continue to help the children growing up in the village as much as possible so that they can be ready for the next stage of education when that comes. He is partnering with his childhood school with the goal of setting up a computer lab so that students can learn basic computer skills. Even used computers are seen as a huge blessing. He also desires to start a second library at the primary school.

Simon sees the opportunity he received to further his education through Belfast Bible School as a key blessing in his life. That blessing, the blessing of education, is something he strives to continue passing on to upcoming generations—students just like he once was half way around the globe in rural Papua New Guinea.

To connect further with the Potinus and learn more about their work, feel free to visit Ruth’s blog at www.simplycontemplating.wordpress.com or visit the Anga Primary School’s website at www.angalutheranprimaryschool.wordpress.com The Potinus can also be contacted through siruthpotinu@gmail.com