Vincent Walden, who graduated with a degree in Graphic Design and Illustration in 2016, loved campus so much that he took on a role as the artist in residence and graphic designer for our Student’s Union so that he didn’t have to leave. We sat down with Vincent to ask him what made him want to stay, as well as his thoughts on this year’s Degree show.

What made you choose Cumbria for your course? 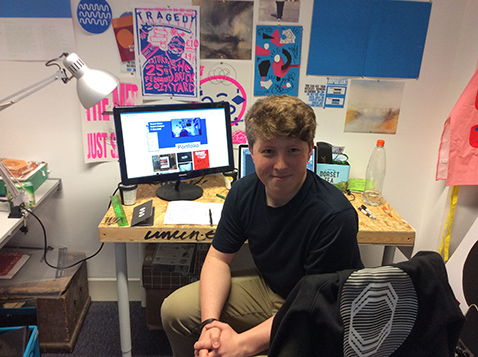 When I was looking for courses, not a lot of places wanted to offer both design and illustration. I didn’t know what I wanted to do, so when I came here I was glad to see that I’d be able to take both courses at the same time, which would let me choose which pathway I wanted afterwards. It was actually the trees that got me – when you come in through the driveway there’s trees on both sides, and I just thought that university is going to be stressful, so if I get to go through trees every day, that’s going to help me relax. That’s what won it for me. Whichever way I walk into Carlisle, I always have a park to enjoy, which is really nice.

What first got you interested in doing an art degree?

I’d always done art, as in fine art, at school and A level and such. But I started making signatures for internet forums from about 14-15, and that just really spurred me on to do art and design.

What made you want to stay on campus after graduation?

It was mostly the opportunities available - I’d seen that there was the graduate role within the Students’ Union.  And I just really liked it here. It’s nice in the winter because you get a bit of rain, and it’s very calm for its size. It’s a bigger city than where I’m from (Morecambe, Lancashire), and a lot greener, and just generally better for me. It’s closer to Scotland as well, which is a big plus for me.

You took part in the show last year. What was your entry like?

It was a bit nuts actually! Whilst I’ve been here I’ve done a lot of coursework like everyone else, but outside of that I’ve done freelance work - I’ve done a lot of posters, I think designing posters is my favourite thing to do. My wall was literally just 52 posters that I created from start of first year to end of third year.

What did you think of last year’s show? 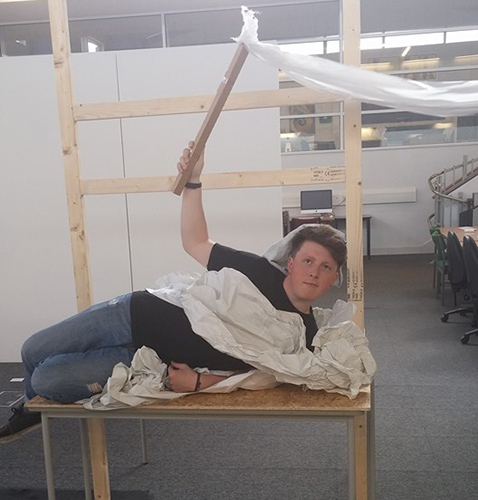 Well I have to say I liked it, because I helped organise it! But it was good, I really enjoyed it. We had a good turnout, and we built a couple of things that will be useful in later years. The fundraising was the hardest part of it, so I’m hoping that the people organising this year’s show can use some of the things we built to make things easier and cheaper for them.

What do you think of the projects you’ve seen being made for this year’s show?

I’ve seen them all the way through the year, so I know it’s all going to look pretty stellar. There’s a couple of people I’ve had good friendships with, I’ve seen their work, and I’m looking forward to it. I find I’m always routing for the people who organise the show, because organising and bringing together 50+ students with other designers and illustrators is really difficult.

Why is the degree show so important?

What does the university offer arts students?

Unlike a lot of courses, our courses are small and don’t focus on what is popular now. We focus on what’s always been good. You’re given all the basics and the chance to work your way through it. I’ve absolutely loved my time here, and I’ve stayed on because it meant I got to stick around this studio at Brampton Road. So if you like trees, you’re a bit of a small time guy or girl and you don’t just want to do what’s popular in art and design, you want to do everything, this is the place to be.