What made you choose to study at St. Martin’s? 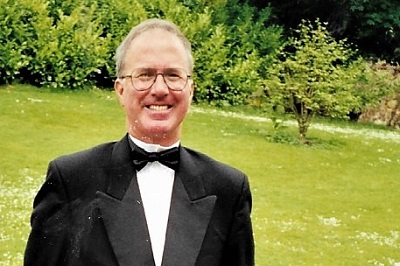 I did not attend university when I left school in the late 1960s. By the mid-1990s, I was coming to the end of my useful working life at Blackpool and was looking for something more fulfilling to do for a few years. I knew SMC from attending church-based meetings there. I called in one afternoon in July 1996 to collect a brochure and was encouraged to go and hear Dr Edynbry speak at the start of an open afternoon which just happened to be taking place that day. As a result, I said a silent prayer and signed up to do the Christian Ministry course the same afternoon; and, two months later, I became a full time student at SMC, studying a BA (Hons) in Christian Ministry.

I enjoyed most aspects of student life. For the first year, I continued to live near Blackpool and commuted daily to SMC. However, for the final two years, I lived at Halton, a pretty country village about five miles from the college and much more accessible to local life. 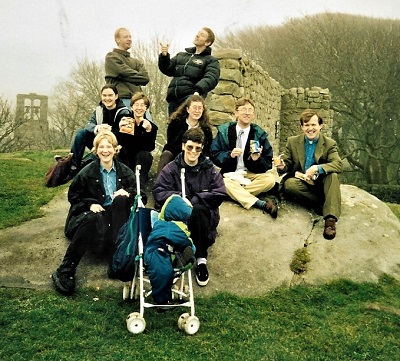 A great deal of my free time at SMC was spent on chapel-based activities. The spiritual side of the church college was led by the Chaplains, Mark Smith, followed by Michael Everitt whom I had already had the pleasure of meeting at Cleveleys. I was a member of the Chapel choir throughout my time at SMC and enjoyed singing under the direction of John Perrin, in my case returning to choral singing after an absence of some fifteen years. We sang at the weekly Wednesday lunchtime service in the chapel, rehearsing on another evening, and we performed on special occasions, for example, the annual carol services which were always well attended. On two occasions, I went with John and the other choir members to the annual Church Colleges Choir Festival, in 1998 at Winchester Cathedral and the following year at York Minster, and what wonderful occasions they were.

I was also persuaded to sing with the college choir for a year under the direction of Gerry Doyle, one of the great characters of SMC and a fine Music Director. We performed Brahms German Requiem in Lancaster RC Cathedral, and this led me to join the Morecambe Philharmonic Choir and to begin an association with choral singing which has lasted ever since.

Away from singing, I tried but usually failed to keep fit in the small gym which was located in the Keep and I also played the odd game of badminton. I attended a number of Dr Edynbry’s enjoyable wine tasting evenings although I never really got to grips with the nuances of the different wines. And when we were celebrating an occasion (and money permitted), I joined the other students at local pubs and restaurants, although I was never really into pub-crawls!

I always enjoyed the large library which was extended whilst I was at SMC, and I spent many happy hour perusing the wide range of books and periodicals there. And I was always grateful to the staff in the library, including its head, David Brown, who were unfailingly friendly and helpful. Adjacent to the Library was a computer suite – open 24 hours a day – which I quite often used to word process essays, not being a computer owner whilst I was at SMC.

Living in a country village such as Halton was a first for me, and I enjoyed the country life and the friendly atmosphere of the people there. I walked miles in the Lune Valley and Bowland Fells and I also enjoyed cycling around the area and along the old railway track, by then a pathway, out to Morecambe seafront and back.

Did the College have any particular traditions that you took part in?

One I do remember was the annual St Martin’s Day procession around the college, with everyone carrying flaming torches and singing hymns. This was organised and led by Mark Smith who was the chaplain at SMC when I started there. St Martin’s Day was on 11th November and I recall the procession in 1996 took place on a damp, dismal evening. However, we enjoyed ourselves and soon warmed up back in the chapel with a glass of something appropriate afterwards.

When I started at SMC, we were about fifteen in number on the christian ministry course and, at age 46, I was definitely one of the two ‘elders’ in the group. The main tutors were Sheila Hunter and Chris Williams and I can say that whilst both ran a tight ship, they were always very approachable as a new life for the students kicked in. Classes took place in the (then) modern building adjacent to the football pitch, whilst tutorials took place in Melling Hall, where the religious studies department was located, and were always interesting if not daunting experiences.

All of the christian ministry students also undertook Religious Studies, and for the first year, we had Peter Gedge as a tutor. Peter had taught at SMC for many years and had been persuaded to come out of retirement part time to lead some of the religious studies modules. Here was a great no-nonsense individual, and whilst Peter may have been part time on paper, the number of additional hours he spent helping the first year students with their essay writing techniques and time management skills could not be counted. His later death was mourned by many.

The Head of religious studies was Brian Gates and many will remember his field trips to the stone circles in Cumbria, where even the fittest of the students found it difficult to keep up with him as he strode between the circles.

Philip Goodchild was another tutor who was well liked at SMC. He was always keen on student participation in his lectures and often handed over whole lectures to individuals or groups, not because he was lazy but because it was always good to hear different perspectives on religious topics and theology.

We had an optional subject to study whilst we were at SMC and I chose community studies. This was led by Alan Robertshaw, another of the great characters at SMC at the time and a very approachable man. Alan was renowned for his love of ciggies, and you could always tell his room in the community studies department by the amount of smoke wafting through the open door into the corridor outside. No ban on smoking in work areas in those days! His death was another that was mourned by many.

And then, one day in May 1999, much to our relief, it was all over and our work at SMC was complete, and we headed off in various directions, in my case for a short break in North Yorkshire.

By June 1999, the daily post was being anxiously scanned for the degree results letter from SMC, and when it came, it confirmed that I had secured a 2:1 in BA Christian Ministry. I was thrilled! 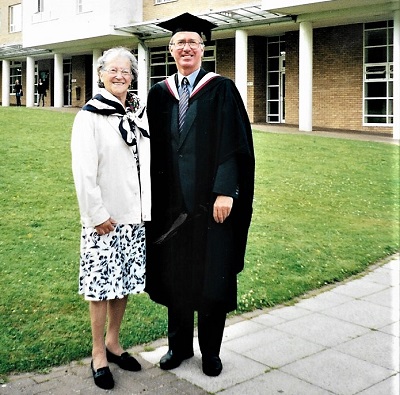 6th July 1999 was a red letter day as this was graduation day for the final year students. In those days, the degrees were awarded by Lancaster University and it was to the University that we headed that morning. I was so pleased that my ageing mum made it to the Graduation Ceremony as, less than four weeks later, she died suddenly at home. Gowns and mortar boards were much in evidence as we took our seats in the auditorium and awaited our turn to go up to the platform and receive our degrees from the Chancellor. Then it was time for individual and group photos outside, with hats inevitably thrown in the air in time honoured fashion, before a final return to SMC for a buffet lunch and end-of-course service in the Chapel. And then, as the football commentator once famously said, “they think it’s all over….it is now”, and our time at SMC was well and truly at an end.

I recall the Wednesday lunchtime rehearsals with the College Choir where the Music Director, Gerry Doyle, who was a stickler for punctuality, always insisted that participants arriving late had to sing an ascending scale in front of the others before being admitted. Many were the occasions when students (including myself) and even the odd member of staff had to sing. However on one occasion, Gerry himself arrived late for some reason, but he stuck by his principles and his singing of the scale was greeted with rapturous applause. A good bloke was Gerry! 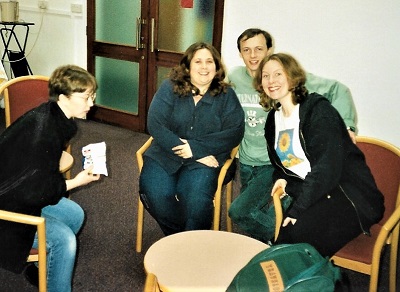 I have maintained regular contact with Becky Hollis who was on the christian ministry course with me, and also Toby Webber who was the chaplaincy assistant in my final two years at SMC. Both are in the ordained ministry and serving in the Anglican Dioceses of Derby and Blackburn respectively. I am also in touch with Michael Everitt, former Chaplain at SMC, who recently took up a senior role at Durham Cathedral, and my Christian Ministry colleague Diane Coleman, also in County Durham.

How did going to college change your life?

I think it changed my life immeasurably. By the mid-1990s, I was in a bit of a rut in my working life in Blackpool (‘too young to retire, too old to learn new tricks’) and I was looking for ways to get out of this impasse. I had been interested in the BA Christian Ministry course for some time, but had never had the courage to do anything about joining it until that fateful afternoon in July 1996 when I was persuaded to go and hear Dr Edynbry speak. That afternoon changed my life forever, new avenues and directions opened up and I was never to return working in my former office in Blackpool, something which I did not regret for a moment.

I went on to successfully complete a MA in Pastoral Studies at Birmingham University in 1999/2000, something which I valued as much as the BA at SMC. My wife and I spent time in South Africa studying AIDS and education projects for our own personal benefits, before I settled down and became a learning mentor and teaching assistant at a local primary school in 2002, a position which I still hold today eighteen years later, albeit with greatly reduced hours in semi-retirement. None of this would have been possible without my afternoon visit to SMC in July 1996. One could question the relevance of a Christian Ministry degree to my current work, but I see helping children and their teachers, and using my skills, as part of ‘my ministry’ as I head through my ‘third age’ in semi-retirement. Also, five years ago, I decided to become an author and publish some memories on aspects of my life. I have now published three books, with the first two selling out and the third selling well despite the present difficult economic climate. I have donated all proceeds to charity – another aspect of ‘my ministry’ – and I believe this finally lays to rest my belief in 1996 that I was 'too old to learn new tricks’. You are never too old to learn!

Any other thoughts you wish to add …

None other than to thank all the tutors and students who were at SMC when I was there from 1996 to 1999. Without you, none of the above would have been possible and I am truly grateful to you for that.

If you would like to reminisce about your student days and share your stories, please fill in a memory form here.