Alumni of our Lancaster campus will be familiar with one of our most treasured items in the University of Cumbria special collections and archives.

Lurking, usually behind a curtain, in the St. Martin’s Chapel is a really rather remarkable piece of art work.  Golgotha by Bratby can’t fail to evoke a strong reaction in anybody who witnesses it for the first time. It is striking, brutal and huge! Perhaps not quite what you would expect to find in a chapel. 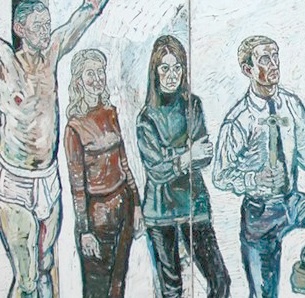 As the name suggests, the painting depicts the crucifixion of Christ, at least we presume this is meant to represent Christ. The central figure is in fact a self portrait of the artist John Bratby. Bratby’s family, friends and acquaintances also feature in the work with their vacant, ugly and depressive expressions. Some of the figures, which are life-size in scale, show a name painted into the board.  B. Innes is Brian Innes of the 1960s jazz band, the Temperance Seven.  John Rydon was an art critic for the Daily Express and not known to be particular fan of Bratby.  Also featured is the painter Jean Cooke who is Bratby’s ex-wife with whom he had four children. His second wife also features standing beside her.

The controversial painting, which hangs over the alter, is thickly painted with black outlined figures and distinctive white paint overdrawing. He favoured heavily impastoed paint which can be seen clearly in the drab off white background.  The colours are sombre with earthy browns contrasting with the cold blue hues of his figure’s skin. 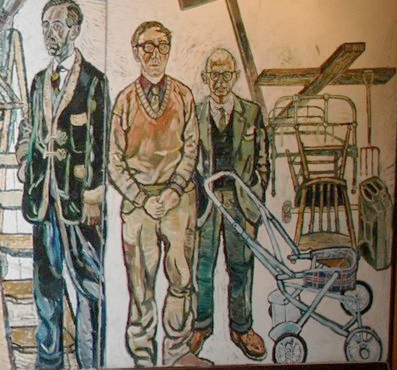 Also depicted in the painting we can see a child’s pushchair, what appears to be an oil can, a gardening fork and spade and an iron bed frame, discarded objects heaped on top of each other.  The inclusion of these is typical of Bratby’s subject matter; the mundane everyday items and raw clutter of domestic life.

John Randall Bratby (19 July 1928 – 20 July 1992) was an English painter and royal academician. Born in Wimbledon he lived a life full of drama and eccentricity. Well known to be shy and quiet in person but ever keen to put his often controversial views forward for the press, which earnt him quite the reputation at the time and ensured the promotion of his art.

Credited with founding the Kitchen sink realism style of painting that was popular in the late 1950s. The harsh, down to earth, often bleak subject matter got its name due to the painting literally of a kitchen sink. Bratby could often be found studying dustbins or setting us his easel in the toilets of the Royal College of Art where he studied.

Bratby has a link to another of our university campuses, Brampton Road in Carlisle. Formerly Cumbria Institute of the Arts, the institution itself can trace its origins back as far as 1822 and since 1950 at Brampton Road when it moved into Homeacres. Bratby taught here for a short spell in 1956.

Golgotha, much like many of the other treasured campus works of art, was acquired by the first principal of St. Martin’s College Dr Hugh Pollard. Pollard saw an opportunity after the piece was rejected by a Manchester theological college, who found it too disturbing. Bratby had sold them the piece on the understanding it would not be covered up and declined the sale when he found that they had in fact planned to do as such. I wonder what Bratby would make of it today, usually found covered with a blind…

“I can’t say that I like it as such but I certainly like its effect.” States Alexandra Logan the University of Cumbria’s Coordinating Chaplain.  “It’s not actually very conducive to worship, or not for me anyway. Perhaps why a former chaplain had it covered up! She goes on to say. “It’s always been controversial. Quite self-referential of him to impose his own face onto Christ’s body if nothing else. I find it hard to tell if he was trying to be iconoclastic or wanting to say that we all are part of the crucifixion narrative in some way, maybe neither. Some people love it and some people hate it but it’s a brilliant talking point and a really amazing part of the university’s history.”

The Queen Mother officially opened St. Martin’s College in 1967 and the story goes that she took one look at the painting and declared "Do you think he has the slightest idea of what Christianity is about?" Obviously not a fan.

What are your thoughts on our Bratby? Do you like it? Do you have fond memories of the painting from your student days? We would be very interested to hear your views, drop us an email to alumni@cumbria.ac.uk

Golgotha is on display in the St. Martin’s Chapel, University of Cumbria, Bowerham Road, Lancaster. The chapel is open most week days when not in use for events or services.  It is advisable to telephone reception on 01524 384290 prior to a visit to check the chapel will be open.

If you would like a guided tour of the chapel, more information on the painting, or to incorporate your visit into a wider campus tour or reunion event then please contact Joanne Lusher, Alumni Relations Officer alumni@cumbria.ac.uk or telephone 01228 616391.