The Grade II listed building, the focal point of our Fusehill Street Carlisle campus, has a long and interesting history. Behind the austere façade, Skiddaw as it is known today, has many tales to tell.

Life in the Victorian workhouse

Plans were approved for the new Union Workhouse at Fusehill Street by the city council in 1862, designed by Henry F Lockwood and William Mawson of Bradford. The new workhouse was designed to consolidate all the poor from smaller workhouses across the city overseen by the Guardians of the Carlisle Poor Law Union.

Designed for 478 inmates at a cost of £11,195.15 the building housed 275 inmates when it opened in 1864. The workhouse had two wings, left for the men and right for the women with the sick and elderly housed in the infirmary building (now Blencathra).

The workhouse was a last resort, feared by society, people would do anything to keep out of it. Inmates were often kept in harsh conditions, cramped together and controlled by strict rules. Families were split up and they had little contact with life outside.  The work was hard and regimented, the men worked long hours outside on the six-acre land whilst the women did needlework or worked in the laundry.

The birth certificates for those unfortunate to be born in the workhouse gave their address as 6 Broad Street, the name of the street that runs down the left-hand side of the building and where the main entrance was. This was to protect them from disadvantage and stigma in later life.

Jimmy Dyer was a well-known figure around northern Cumbria in the late 1800s. He was a soldier in his early life but didn’t take to that, and as he disliked hard work, he entertained the crowds at races and fairs with his violin music.  Jimmy's wanderings came to an end in 1903 when his personal situation was such that he had to move to Fusehill Workhouse where he died soon after. Immortalised in bronze, a sculpture of Jimmy Dyer can be found in the Lanes Shopping Centre. 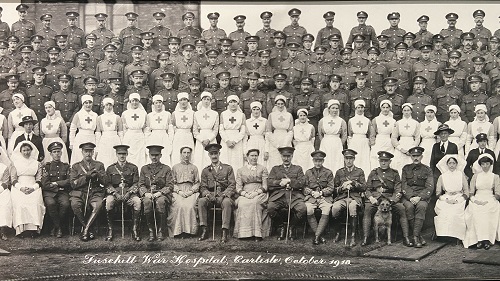 During the first world war in 1917, the Fusehill buildings were commandeered as a hospital for soldiers. The elderly and poor of the workhouse were moved to sites around the city.  The war hospital closed in 1919 and had seen a total of 9,809 patients with around 80 nurses tending to the sick and wounded. For those who died, their bodies were either sent back home or laid to rest in local city cemeteries. 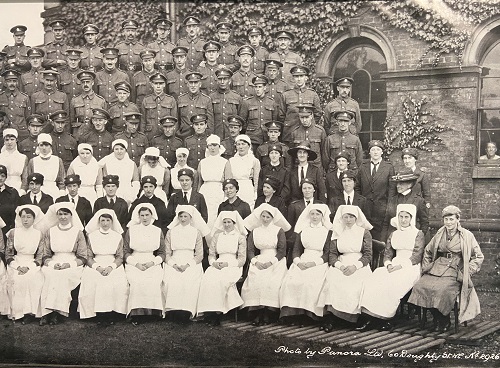 Between the wars Skiddaw was again utilised as a workhouse for the poor. In 1929 the name changed to Carlisle Poor Law Hospital. During the second world war the site was again a military hospital, caring for soldiers from both sides of the conflict.

A hospital for the city

In 1948 the National Health Service was established, and the building became the Carlisle City General Hospital, caring for the city’s sick.

A university of and for Cumbria

Established in 1964 St. Martin’s College, based in the former Bowerham Barracks in Lancaster was a teacher training college with degrees accredited by Lancaster University. The college expanded rapidly and towards 1989 they were developing their course portfolio into Nursing. In 1995 St Martin’s College took over the Lakeland College of Nursing and in 1998 moved into buildings at Fusehill Street. In 1999 the City General closed and all hospital care was consolidated at the Cumberland Infirmary on Newton Road, the Fusehill site then became the Carlisle campus of St. Martin’s College. St. Martin’s gained degree awarding powers in 2006 and joined together with Cumbria Institute of the Arts based at Brampton Road in Carlisle and the Cumbrian campuses of the University of Central Lancashire to form the University of Cumbria in 2007. 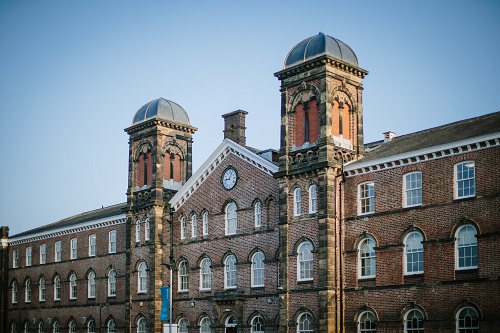 Gazing up at Skiddaw with its pleasingly symmetrical proportions, you cannot fail to notice the ornate stonework, the lead cupolas, the clock front and centre, that one bricked up window on the top floor. Often overlooked and located on an otherwise typical city terraced street this building has served the people of Carlisle very well for the last 160 years; housing the poor, fixing the war wounded and now educating our teachers, health and social care professionals, scientists, business leaders and law enforcers of tomorrow.