Meet the Victorians who left their mark on the roof of Fusehill Street’s ‘Skiddaw’ building...

When contractors climbed to the top of listed building ‘Skiddaw’ during a refurbishment project at Fusehill Street campus they made a discovery. Scored into the lead dome of one of the building’s cupolas were nineteen names, nicknames and initials: traces of some of the men who worked on the building over the last century. Alan Ewing, acting head of Estates for the University’s Carlisle campuses, saw the inscriptions in situ on the roof: ‘It’s like stepping back in time – you feel quite privileged to be up there and part of a long history.’ 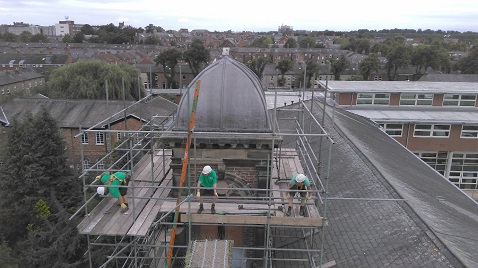 Some of the inscriptions carry dates as well as a note about the person’s occupation. The dates span 1887 to 1983. ‘J. DENARD’ is one of the earliest dated inscriptions. He is identified as a ‘painter’; so too are ‘J. MOFFAT’ and ‘LING & MARK’. This presented just one of the cupola’s puzzles… what did painters have to do with lead? Alan Ewing suggests the answer is, ‘very little!’ ‘These painters were employed as part of the building’s maintenance programme; they would need to get to all the high woodwork and iron. They weren’t signing their own work when they scored their names into the lead though; they were leaving their marks in a relatively hidden place with a great view, which they must have known only a few people would get to see.’

At the time when J. Denard’s name was scored into the dome, he would have looked down from his perch in the sky to see the grounds of the Union Workhouse. Opened in 1864, the Fusehill Street Workhouse was managed by a board of ‘Guardians’. The Carlisle Public Library holds printed Minutes of Proceedings for the Guardians’ meetings from 1897 onwards. These books offer a fascinating and sometimes chilling glimpse into daily life at the Fusehill Street Workhouse. They contain a mass of information about how the institution was run, from decisions about individual ‘inmates’ to suppliers’ tenders for everything from coffee to clogs to coffins. The books also detail some of the maintenance work carried out on the buildings. Here, we find some of the cupola names in print: they were contractors employed by the Board of Guardians. 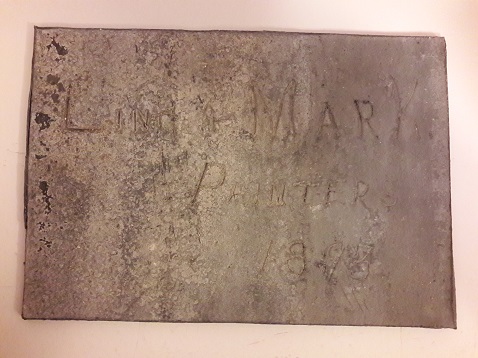 The Library doesn’t hold the Minutes for 1893, but Ling and Mark did another job for Fusehill Workhouse in the summer of 1900. The Guardians considered five tenders for ‘the painting of the outside wood and iron work at Fusehill Workhouse.’ They resolved ‘To accept the tender of Messrs. Ling and Mark, of Charlotte Street, to do the painting for £70.’ The Minutes for another meeting, in May 1899, refer to the outside wood and iron work of the ‘House, Hospital and Premises’ having been painted six years since… perhaps Ling & Mark did this job in 1893.

Census records and city directories contain clues about who these men were. Middleton’s Commercial Directory for Carlisle (1893-4) lists Ling and Mark together under the section of ‘Painters &c’, and placed them in Carlisle at No. 4 Charlotte Street. Perhaps they teamed up to tackle larger jobs than either of them could manage alone. The 1891 census, taken only two years before they left their names on the cupola, reveals more about their family lives. In 1891, 22-year-old ‘House painter’ Tom Mark was living at home on Carlisle’s Collingwood Street with his mother Elizabeth and his younger sister Sarah. The census gives Sarah’s occupation as ‘cotton weaver’ and Elizabeth’s as ‘Retired Cotton Picker’. Fast forward ten years to the 1901 census… now Tom is married to Mary, and the couple have two young children, Elizabeth Ida and Tom B.  They live at Nelson Street, a short distance from their old home, with Tom’s widowed mother Elizabeth (probably little Elizabeth’s namesake). As for Thomas Ling, 1901 found the 35-year-old painter living at Randall Street with his wife Mary and their three children: Thomas James (11), Fred (9) and Dorothy (7). They were only a short walk away from the Mark family’s Nelson Street home. Thomas was born in Newcastle, but his wife and children were born in the city. By 1911, Thomas Jr. was following in his father’s footsteps as a painter. 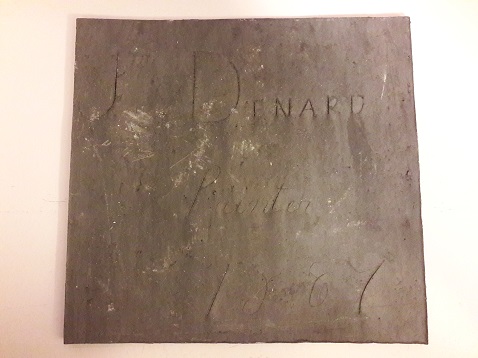 What about ‘J. DENARD’? The census for 1881 suggests that he was the head of a family of painters at Scotch Street, Carlisle. Joseph Denard was born in the city in c. 1832. In 1881, he and his wife Margaret lived with eight children including young ‘servant’ John Leonard. Margaret had worked as a grocer in 1871, but by 1881 her son David seems to have taken up that line of business while she ran a large household. In 1881, two teenage Denards, John and Joseph, are listed as painters, as is John Leonard, who may have been learning his trade. (Records for 1871, 1901 and 1911 suggest that at least three more Denard sons, Robert, William, and David, followed in their father’s footsteps.) Without further research, we can’t know if it was Joseph Denard Senior or Junior who left the inscription – or it may have been John. Perhaps someone reading this has encountered the Denards while researching their family tree… if so, we would love to hear from you.

The names looked down from the cupola as war transformed the workhouse buildings into a military hospital; as the workhouse hospital’s role broadened and evolved in the service of the city; as the National Health Service was introduced; as the City Maternity Hospital was founded; as Fusehill Street became a home for the University of Cumbria. Many people have a close personal connection with the Maternity Hospital… we can think of the names as another reminder of the link between the Fusehill Street buildings and the everyday lives of people in the city. 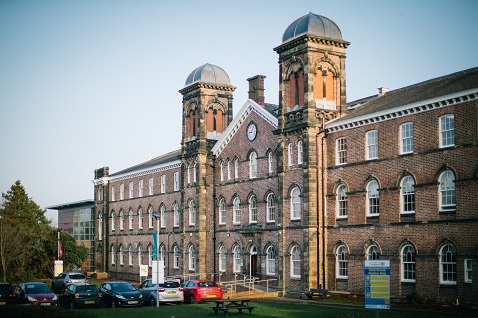 The names had to be removed from the roof during the refurbishment of ‘Skiddaw’ because the lead of the dome had deteriorated over time. Peter Trumper, formerly Head of Estates for the University of Cumbria’s Carlisle campuses, recognised the names as part of the building’s rich history and made sure that the inscriptions were cut away and saved. They are now part of the University’s Archive and Special Collections. The dome is now covered with new lead, which contractors installed using techniques and tools similar to those used by contemporaries of J. Denard and Ling and Mark. The inscribed lead pieces are on display at Fusehill Street in the Skiddaw building.

With thanks to the staff of the Carlisle Public Library and the University of Cumbria Estates teams in Carlisle.