When sorting through their mother’s things, Katie Harrod and her sister Debbie Steer came across an extraordinary treasure trove of items pertaining to their mother’s academic life at Charlotte Mason College, Ambleside during the Second World War.

Elizabeth Maxwell-Stephens was just 18 years old when she attended the all-girls ‘House of Education’ in January 1939 to December 1940 and it was there she studied education in order to fulfil a lifelong passion to work with children. 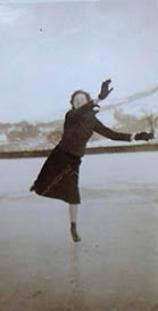 The items provide a snapshot of Elizabeth’s life at the time through her letters to her parents, original photos and artwork.

Charlotte Mason’s philosophy was that schools should lay the foundations for their students’ wider interests in life, necessitating a broad and liberal curriculum, particularly developing their appreciation of art and nature. This was reflected in the focus of the teacher training at Charlotte Mason College (CMC).

At one with nature

As part of their varied studies all CMC students kept a nature notebook in which they were encouraged to document the natural world around them. This included “fabulous watercolour paintings, all the notes of where they found these plants and birds and little bugs and caterpillars … and lovely descriptions of where they were found.” said Katie. She continued, “All the way through we have delighted in them. Our nieces and nephews, brothers and sisters-in-law have so enjoyed looking at them”. 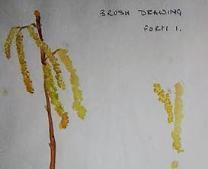 “I don’t think the grandchildren could quite believe that their grandmother was so artistic – and she wrote so well. Never repetitive, never boring, just fascinating.” added Debbie.

As well as the notebooks, Elizabeth’s daughters came across two exam papers from her final term in November 1940, covering the ‘Theory of Education’ and ‘Methods of Education’. Reflecting the wide curriculum the students were to teach, the papers cover some very taxing philosophical questions, including ‘Do you think it possible to explain to young children how the country is governed, without being dull?’ and ‘If a pupil asked why God doesn’t prevent war, how would you answer it?’ Talking about their contents, Debbie said that these questions are “still very relevant to today… and I think a lot of students would be hard pushed to answer [many of] those questions.” 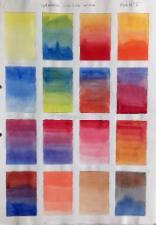 In addition to the original prospectus from the college, Katie and Debbie found a document containing the ‘List of Necessaries’ each student had to bring with them when they arrived. Suffice to say, the items listed are quite a leap from those suggested to current students and provides a wonderful snapshot of a by-gone era. “Skirts, one suitable for climbing, jumpers, sports blouses, a dinner dress, a warm afternoon frock, and very warm underclothes for winter wear. One pair of galoshes, a hockey stick and one pair of shoes with bars, or lacrosse boots…a pocket lens for botany and a paint box. Bicycles and gramophones must not be brought!”

Friends forever – ‘group chat’ in a time before social media

The girls formed firm life-long friendships while at the college. It could have been for a number of reasons, it was wartime, all the men had gone away, so there was a great group of girls who formed very strong friendships, which is evident in the photographs in the collection. Debbie said, “My mother would have been very happy to have had an iPhone and a WhatsApp group!” But she did the equivalent for that era by taking “lots of photographs of all her friends, climbing, walking and partying [and] the fact was that they remained in contact for all these years, well into their 80s.” 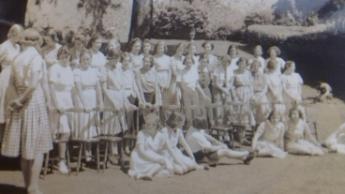 Every six months or so, members of Elizabeth’s cohort would receive a package, referred to as, ‘The Budget’ - a handmade, waterproof cloth envelope that contained letters and photographs from all her group of friends. Each time they received it, they would take out the letter and photos they put in previously and replace it with new ones. “She loved it and we as children always knew when the Budget had come. She would always sit down with a cup of tea and read it. It was an enormously good way of them keeping in touch with each other before social media came along.” Debbie said.

Letters, and the War

The collection contains two transcripts of letters that Elizabeth wrote to her parents in which she writes a full summary of two weeks in her final year. She was always known as ‘Max’ to her Charlotte Mason friends and Parents National Education Union (PNEU) colleagues, but to her parents and siblings she was ‘Dibby’. 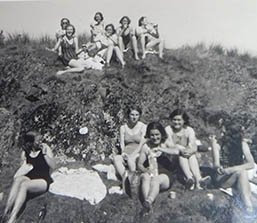 In them she writes vividly about her friends, her fun hiking the high fells, leading Girl Guides, folk dancing and swimming in the lakes and tarns (skinny-dipping when they could, in an era of far fewer tourists and hikers than we know today!)   She also writes of her anxieties in preparing for the college practical exams, but the success that surprised her in one of them.

In June 1940 France capitulated to the German Nazi Government and Elizabeth mentions a French fellow student, Pauline de Chozal, and the French teacher, Mlle Chaudouet, as being very upset and anxious at this time. She makes various other references to her own worries about her family living close to London and at risk from the bombing raids she hears about on the radio; and to male friends now on active war service. Indeed her fiancé, Charles Steer, was posted to the North Africa campaign, and although they married in 1944, it was only in 1946, after the war in Europe had ended, that they were finally able to live together & see the first of their four children born in November that year.

After graduating from Charlotte Mason College, Elizabeth lived out her career, teaching in various PNEU schools in the UK, and later enjoying a long & happy retirement until her death in 2007 at the age of 86.

“So this collection provides a huge snapshot in time of that era, that’s just very, very special,” Katie concluded.

Alumni Association at the University of Cumbria

If you or a relative are an alumnus of the university or one of our legacy institutions, we’d love to hear your memories so please get in touch by emailing alumni@cumbria.ac.uk or telephone 01228 616391.