If there was one student from ’63 who knew her way around the Charlotte Mason College, it was Gwyn Flitters.

Back then she was Gwyn Jones, the mischievous trainee teacher from Stockport who kept turning up in all sorts of unusual places – sneaking into rooms that were supposed to be out of bounds, slipping through windows after lights out, and somehow always managing to get away with it.

‘We had such a lot of fun,’ she says, ‘even though there were all the strict rules about what time you had to be in and where you could and couldn’t go.’

Gwyn’s secret was her inside knowledge, all gleaned from someone who was perfectly placed to show her the hiding places and handy passageways that still make the Ambleside campus a fascinating place to roam around. 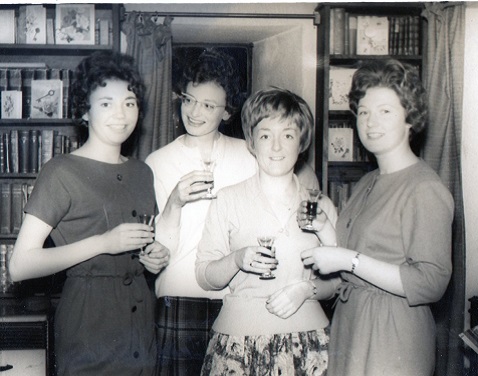 ‘The groundsman’s son was my boyfriend,’ says Gwyn, ‘so of course I knew everything about the place!’

But it was far from a relationship of convenience, nor was it short-lived - the couple ended up getting married. Mr Flitters Sr. obviously approved of the match, but perhaps he wasn’t fully aware of some of the tricks his daughter-in-law-to-be was getting up to while he was out patrolling the grounds.

‘One of my friends, a girl in our year, was really quite poorly once, and we weren’t allowed to go into her room to visit her. That wasn’t going to stop me. I knew that if I climbed up a wall on to a low roof I could get to her window, so I crept in to see her. You should have seen the look on the face of the person who was guarding the door when I walked out, having never gone in!’

Gwyn and her husband spent time abroad, living in Iran for a while. She lives in Somerset now, still tremendously fit and active, which is why she pretends to wince at the sight of herself in one of the class photos on display at the reunion.

‘Look at me there,’ she smiles, ‘I’d put on a stone-and-a-half then, they used to make us go to every meal. It was a rule, breakfast, lunch, afternoon tea and dinner. I’ve never been so big!’