Joan Stephenson lives in comfortable retirement near the town of Poitiers in France these days, but when she arrived in Ambleside to study for her teaching qualification back in 1960, the last thing she was interested in was staying in her comfort zone.

The then Joan Williams from Durham City was an all-action girl who loved nothing better than walking into the fells by day and into one of Ambleside’s pubs by night. The pubs were effectively out of bounds to the Charlotte Mason students, so no wonder she soon became one of the more notorious students around the town.

‘When we were organising this reunion I wanted to go to the Salutation Inn for the big dinner,’ she laughs, ‘just because we were barred from it when I was studying here!’

The Salutation’s high profile position in Ambleside meant there was too much chance of being spotted, so sensibly Joan stayed away. The story was very different at another, more discreet hostelry nearby.

‘If you went to the Golden Rule you could get a nice jug of draught sherry,’ she says, picturing the times she and her fellow conspirators did just that. 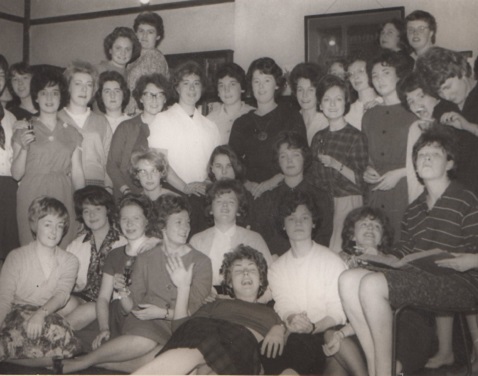 ‘We had so much fun, even though there were all of these rules'.

College life was serious though, and like her colleagues, Joan remembers taking pride in her studies at Ambleside, working hard in a growing belief that the children she was being trained to teach were the future.

‘Our motto was “For The Children’s Sake”. It used to be written in Latin, but none of us can remember the Latin now.’ After college she went back to Durham to teach for six years before having four sons and adopting a daughter. Eleven years later she was back in class, teaching until 1990, including a role as Primary Drama Consultant for Cleveland.

Irrepressible, smiling and chattering to her old friends, it’s easy to see why her face was so recognisable around Ambleside 50 years ago. Unfortunately for Joan it was sometimes too recognisable.

‘I was called in to the principal’s office one day, her name was Mrs Hardcastle. She said: “I’ve heard there is someone wandering around the village with a tea cosy on her head.”

‘She was talking about my hat! My best hat for mountaineering, I loved it. I was mortified! Apparently,’ smiles Joan, ‘it didn’t look quite the thing for a young lady studying at Charlotte Mason to be wearing. The college’s reputation was at stake!’