Stephanie Speight, or Cookson as she was known then, studied at the Charlotte Mason College from 1962 to 1965. Here she shares her memories, everything from her entrance interview, the food in Scale How to the gruelling school practice.

Stephanie Speight, or Cookson as she was known then, studied at the Charlotte Mason College from 1962 to 1965. Here she shares her memories, everything from her entrance interview, the food in Scale How to the gruelling school practice. 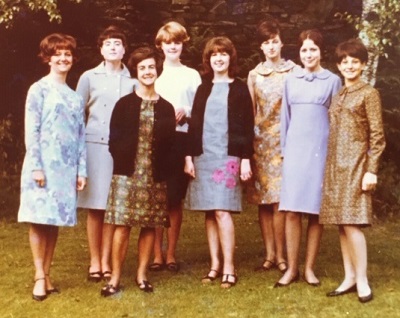 In the fifties and sixties, if you wanted to be a teacher, the normal thing was to apply to a teacher training college.  Sadly, some people took a degree at university and often drifted into teaching with no real conviction and no qualification.  This has changed now.

I chose CMC, which then was part of The University of Manchester, because there were very few training colleges which offered French as a main subject.  It was my favourite. So, with hope in my heart, applied to Ambleside (situated in Westmorland a far more ‘romantic’ sounding County than the later Cumbria).

I took a coach from Preston to go for my interview, one bright, cold spring day.  As it trundled up the A6 (no motorway then), I became excited to catch my first sight of the Langdales, tipped with snow.  I had a good feeling about my ‘choice’.

On reaching the bus station in Ambleside, I followed directions to walk up to Scale How and I have never forgotten the beautiful Cedar of Lebanon that used to stand outside the house, spreading its huge branches over the lawn.

Miss Moreton interviewed me and told me on leaving that the result was ‘probably positive’.  It could be that I had made a fuss of her cat, Peter…  I can’t remember much more than discussing the Kon-Tiki Expedition (book)!

In September, I began college.  All the students were female in those days.  We had received a list of things to bring with us, an assortment of necessities such as Acme Thunderer Whistle, which took some tracking down.  I recall my mother having a panic because we needed a two ‘cocktail style’ dresses for evening dinner. Being an excellent seamstress, she straight away made enquiries as to what, exactly, a cocktail dress meant and she produced two stunning dresses out of material bought on the market.  I wore them for three years at dinner….

Not too long before we were at college, it seems there had been a fairly strict dress code and some older people in the village assured is that ladies of CMC had been the epitome of genteel behaviour and decorum.

However, we were now entering the swinging sixties and things were becoming relaxed, thank goodness. Yet there were still a few strict regulations.

There wasn’t a lot of nightlife apart from the pubs or the cinema in the village.  We were supposed to be back at our hostel by ten thirty or eleven at weekends anyway.

Often on a Friday there would be a college dance, held in Rawnsley.  The music was provided by a rather “past its’ sell by date trio” and the “male interest” was drummed up from the village youth cadets from Wray Castle, tutors and lads from Brathay, or climbers and walkers from the YHA.

Occasionally there was a van load of men from the Myerscough Agricultural College and along with a heavily shod youth hostellers we girls were lucky to end the evening without broken toes or laddered stockings.  Yes, tights had not yet been invented.

On the other hand, we were lucky to have on our doorstep within easy walking distance on a pleasant evening or at weekend, Rydal, Waterhead, Kirkstone, Wansfell, Loughrigg and the rest.  I say within walking distance since none of the students in my year had a car.  On Saturday a bus ride to Kendal or even Keswick was quite an adventure.

In the first year the students were allocated to one of the several hostels in the local area.  I was sent to Fairfield House.  Most of us had to share a bedroom then.  I was lucky to be roomed with a pleasant girl named Edna.

Later, we were asked to nominate the place we would like to be in our second year.  So I spent most of the remaining time at CMC at Chapel House, on the hill going up to the Kirkstone Pass.

Did Charlotte Mason College have any particular traditions that you took part in?

I consider that we were very fortunate to have such nourishing and frequent meals, all provided at Scale How, free!  There was a cooked breakfast, elevenses, lunch, afternoon tea and dinner at night – no trousers allowed, strict dress code.

One tradition I do remember was that if you wanted high tea on Sunday, it was provided on a help yourself basis, but you had to put your name on a rota to set and clear away tables and wash up as the staff were not working on Sunday night.  It was called ‘maiding’.

So, if you missed meals it was your own decision and sometimes people did, if it meant trailing out in rain or snow.  I am not ashamed to say I rarely skipped a meal.

Since my main subject was French, we had lectures in Annexe. Our tutor was firstly Miss de Souza, and afterwards Mr Reece ( Rhys?), who lived in Grasmere, and was an excellent teacher.

There were two annexed huts at the side of Scale How named George and the Dragon.  Because one of my subsidiary subject was music, I spent a lot of time in one of them having lessons from Miss Hugman.  She was quite a strict teacher.  Maths was taught in the other hut, by Mister Dagnall.

The other subject I chose to study (one main, two subsidiaries) was Art, where lessons were given by Mr Henry Almond, at Hilltop hostel.

On reflection, I think the reason that most of us were so fit was that we had a lot of trudging up and down the village or across to Scale How for different lectures, all day and sometime in inclement weather.

I think one of the most gruelling parts of teacher training was school practice.  In the years I was at college a bus would collect us, very early, at the college gates, usually about seven o’clock and distribute us about the area – from Kendal and as far as Barrow in Furness, east to west and Milnthorpe up to Grasmere, south to north.  We were dropping with fatigue, returning to college as late as six or seven at night, then we had to give feedback to our tutors and prepare the next day’s lessons.  The staff did not allow students in the staff room!

On reflection, though, one has to start somewhere, I feel that I was only just learning what teaching was all about by the end of my first couple of years on the job.

Did you make any lifelong friendships at college?

Between spring term of my second year and up to the end of December I was sent with another student Lilian, to study in France, on a bursary.  This was a happy period in my student life, giving me freedom and a deeper knowledge of the language.  I remain grateful to CMC for giving me this chance.

Lilian and I became good friends.  We went to each other’s weddings, later.

Other friends I made at college have stayed in touch and it has been a pleasure to watch their careers unfold and keep up with their family news.  Sadly, one close friend has passed away, but I remember the happy times walking with her.  She was a Geography student and walked me around Borrans Park, patiently explaining the meaning of a roche montonnee, a U shaped valley and other geological expressions.  We kept in touch until she died.  I miss her.

Do you have a particular memory of your time at Charlotte Mason?

In 1962 in October the US and the Soviet Union confronted each other in what came to be called the Cuban Missile Crisis.

The new principal of CMC, Miss Marjorie Boulton, a dynamic, unusual, but inspiring new kid on the block asked all of the students to come to a special assembly in Rawnsley, to pray for world peace.

I remember clearly the solemnity of the occasion and although I can’t recall the exact words, I can’t forget the complete, awe-struck silence that they inspired in us.

The following November, one evening, a Friday, in 1963 I also remember how stunned we students were, to hear the news coming from Dallas about the shooting of J F Kennedy.  We were rushing to find someone with a television to see if it was a hoax; could it possibly be true?

It is curious to think that now such shocking world-changing events are received with no surprise, with nonchalance.  Did we live in an era of greater innocence? *Fake news was a phrase, as yet, un-invented.

Besides the friendships we made there, college taught me to seize opportunities that suddenly arise, to adapt to circumstance, accept disappointment and admit that a teacher doesn’t always know best.  What a gem of wisdom to be whispered in the ear of budding teacher?

Above all, ‘for the children’s’ sake’ should be uppermost in our mind.  If not don’t go into teaching.